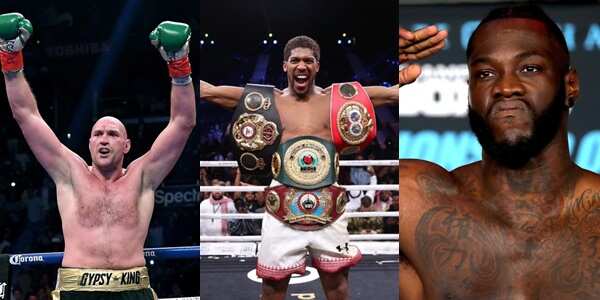 Anthony Joshua has again sealed his top spot in the tiers of current heavyweight stars with the 30-year-old pugilist coming behind WBC champion Deontay Wilder and his countryman Tyson Fury in Independent’s latest ranking.

The Brit avenged his first career loss and reclaimed his heavyweight spotlight after smartly outclassing Andy Ruiz to a unanimous point decision victory in Saudi Arabia on Saturday, December 7.

The bout dubbed ‘Clash of the Dunes’ saw Joshua dragged to the twelfth round by his chubby opponent in the 15-000 capacity Diriyah Arena stadium.

And in its latest ranking of the heavyweight division stars, UK Independent saluted Joshua but overlooked him for the first spot despite his resounding victory over Ruiz.

Instead, Deontay Wilder was controversially adjudged the biggest boxing star of the year in the heavyweight division.

Bronze Bomber, known for his aggressiveness and confidence, successfully defended his WBC heavyweight belt for tenth time include an epochal victory over Cuban fighter Luis Ortiz in Las Vega.

And with 41 knock-out wins in 43 professional fights, Wilder has a point to prove as a top star of the division.

Meanwhile, Tyson Fury was ranked second on the list after the WBC champion. The British professional boxer enjoyed a stint in both boxing and wrestling this year.

His bout with Wilder ended in stalemate but boxing fans were of the opinion that he deserved to be handed victory over his American opponent.

Fury, who made a sensational return to boxing after a cheeky career setback that saw him vanish off the fighting stage, will be facing Wilder for a rematch in February 2020.

Meanwhile, Legit.ng earlier reported that Anthony Joshua has been ranked the biggest star of the heavyweight boxing division by BoxRec following his quite impressive victory over Andy Ruiz.

Joshua avenged his first career loss through a unanimous point decision on the Mexican star on Saturday night, December 7, in Saudi Arabia.

Women are behind successes of leaders, presidents – Aisha Buhari reveals why men take advantage of opposite gender

Pokemon Sword and Shield: all the latest news about the anticipated game

While Nigerian leaders knee before pastors, imams for blessings, rest of the world is moving on

Lady calls out Lagos hospital for misdiagnosing her prospective staff

Huawei P9 Lite Mini review: Is it worth your money?