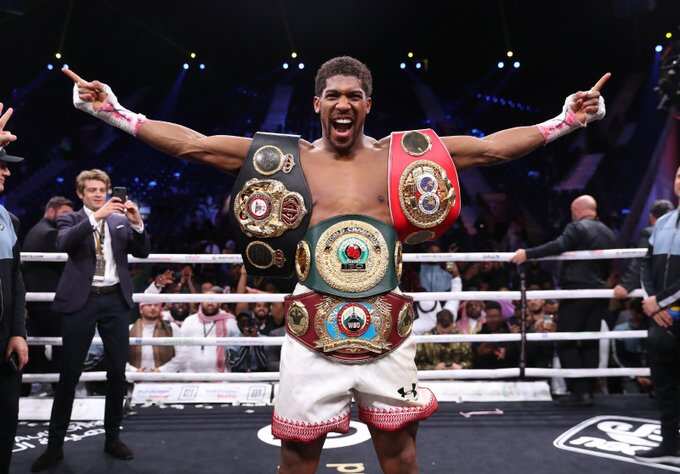 – The 30-year-old will be smiling to the bank this year with £8.3million buzzing in his account

Anthony Joshua’s success is currently raking in millions of pounds from endorsements and sponsorship deals.

The British heavyweight fighter reclaimed all four belts following his unanimous points victory over Andy Ruiz Jr, in Saudi Arabia, over the weekend.

And the 30-year-old’s take home for 2019 is pegged at £8.3million-per-year from advertising several brands of products.

Joshua’s stock would have dropped if he had lost to the Mexican-American for the second time in six months, but his win cemented his place as boxing’s highest earner in 2019.

Top brands like Hugo Boss, Jaguar, Land Rover, Audemars Piguet and Beats By Dre, have made Joshua the poster boy adverts because of his success in the sport and his good looks.

His comeback win against Ruiz Jr, puts him as one of the most marketable sports stars on the planet but Joshua is still behind the likes of David Beckham, Tiger Woods, Lionel Messi, Cristiano Ronaldo.

Meanwhile, Legit.ng had earlier reported that Anthony Joshua supporters want his next fight to be against undefeated heavyweight champion Deontay Wilder after leaving a message on social media.

GIG Logistics – Know all the branches, get a quote and send your parcel in peace

I will be more party-conscious in this 2nd term – Buhari

Here is a list of interesting male and female demon names

The scramble for Nigeria by Sylvester Asoya (opinion)

Meet Nigerian lady who got juicy appointment with Google company

July 14, 2019
0
Your playlist is not complete without the new jam by Sarkodie – Year Of Return
Man says school is a scam after singer Peruzzi shares throwback photo as a doctor