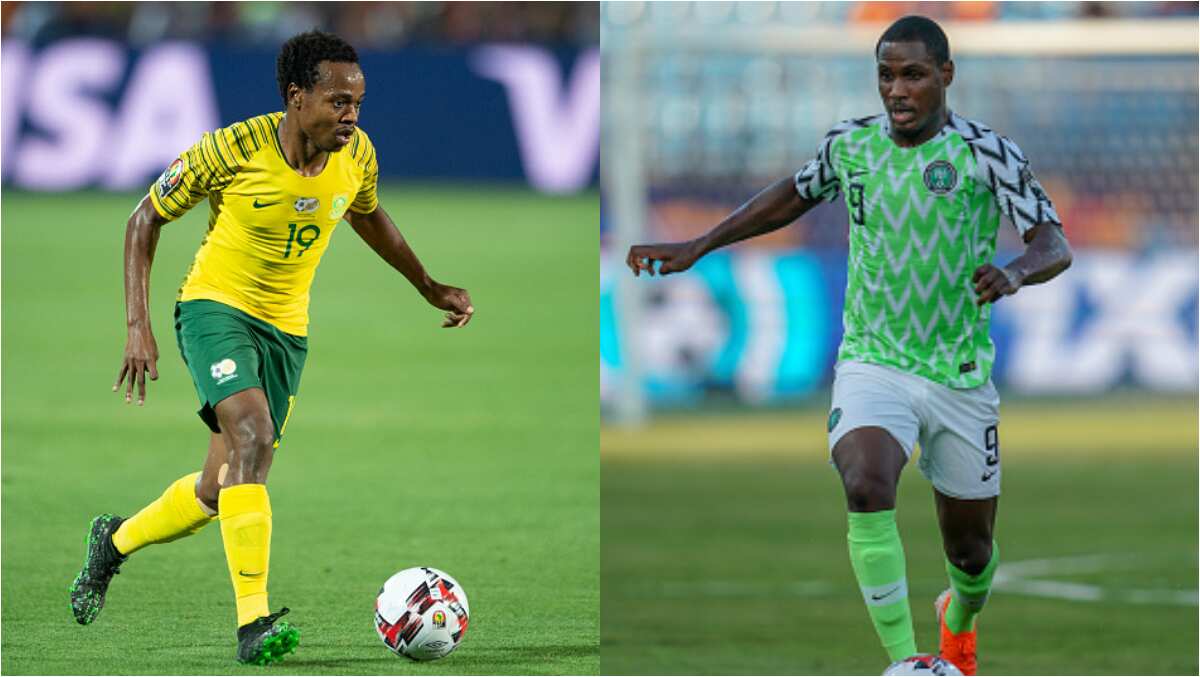 Nigeria vs South Africa will take centre stage on Wednesday, July 10, as both teams battle for a place in the semi finals at the ongoing AFCON 2019 tournament in Egypt.

The Super Eagles got the better of West African neighbours Cameroon 3-2 in their entertaining round of 16 clash in Alexandria.

On the hand, Bafana Bafana shocked host nation, Egypt 1-0 in front of their home fans at the Cairo International Stadium in a massive upset.

Now both teams meet in the quarter finals in what promises to be a cracking game and Stuart Baxter’s men are still the underdogs going into the fixture against the three-time African champions.

1. Nigeria have not won South Africa in their last five meetings

The last time Nigeria defeated the South African national team was in a CHAN group stage game on August 19 2014 where Super Eagles won by 3-1 in Cape Town. Nigeria are yet to record a victory till date against Bafana Bafana since then.

2. Ahmed Musa was the last Nigerian player to score against South Africa

Musa was the last Nigerian player to score against South Africa and it was in an international friendly in 2015 which ended in a 1-1 draw at Nelspruit.

Musa who was captain scored a sensational goal in the 85th minute but Bogani Zungu salvaged a draw for Shakes Mashaba’s side.

3. South Africa have only managed to beat the Super Eagles twice in all and only once in a competitive game

Nigeria’s first defeat against South Africa came in 2004. The 2-1 loss in 2004 was in friendly game used to mark Nelson Mandela’s birthday.

Stuart Baxter’s men also defeated Nigeria in front of their home crowd at the Godswill Akpabio Stadium in an AFCON qualifier played in Uyo in 2017.

4. Nigeria have never lost to South Africa at any AFCON tournament

South Africa has never beaten Nigeria in the Africa Cup of Nations finals, with their two previous meetings – a semi final clash in 2000 in Lagos and group phase encounter in 2004 in Monastir – ending 2-0 and 4-0 respectively in favour of the Super Eagles.

Meanwhile, Legit.ng had earlier reported that Austin Okocha has allayed his fears about what South Africa duo Percy Tau and Thembinkosi Lorch could cause to the Super Eagles defence ahead of their AFCON quarter final cracker.

Nigeria will take on South Africa at the Cairo International Stadium for a place in the semi finals on Wednesday, July 10.

Cardi B set to take EKO Atlantic by storm

Meet Yinusa, a middle-aged woman who makes a living as a scavenger

Ubi Franklin talks about fatherhood, says ‘the way I have had my kids is not the way I wanted them’ (video)